Next
Previous
Ref:
Date:
Location:
Photographer:
Next
Previous
Ref:
Date:
Location:
Photographer:
Robin Gillanders is an Edinburgh based photographic artist. He taught History at the Royal High School in Edinburgh for seven years until 1983, and then worked commercially from a studio in central Edinburgh. After a period teaching part time, he began teaching Photography full time at Edinburgh Napier University in 1988, and became Reader in 2004. He left teaching in September 2012. He was awarded an Honorary Fellowship by Edinburgh Napier in October 2014.

He has exhibited frequently in Scotland and internationally in France, Spain, Poland, Norway and USA.

His work has been in several publications and he has published four solo books with the National Galleries of Scotland, Birlinn and David & Charles.

Gillanders works primarily in B&W, in film formats from 35mm to 10x8. He still makes silver gelatin prints from all these formats in his own darkroom. He also works digitally and in colour.

All work on this site is for sale and he is available for commissions – studio or location. He owns a camper van. 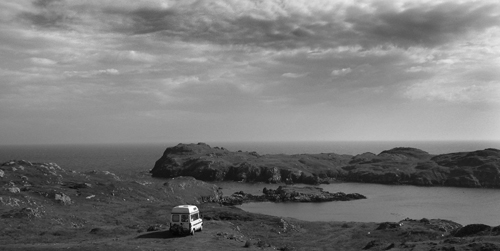